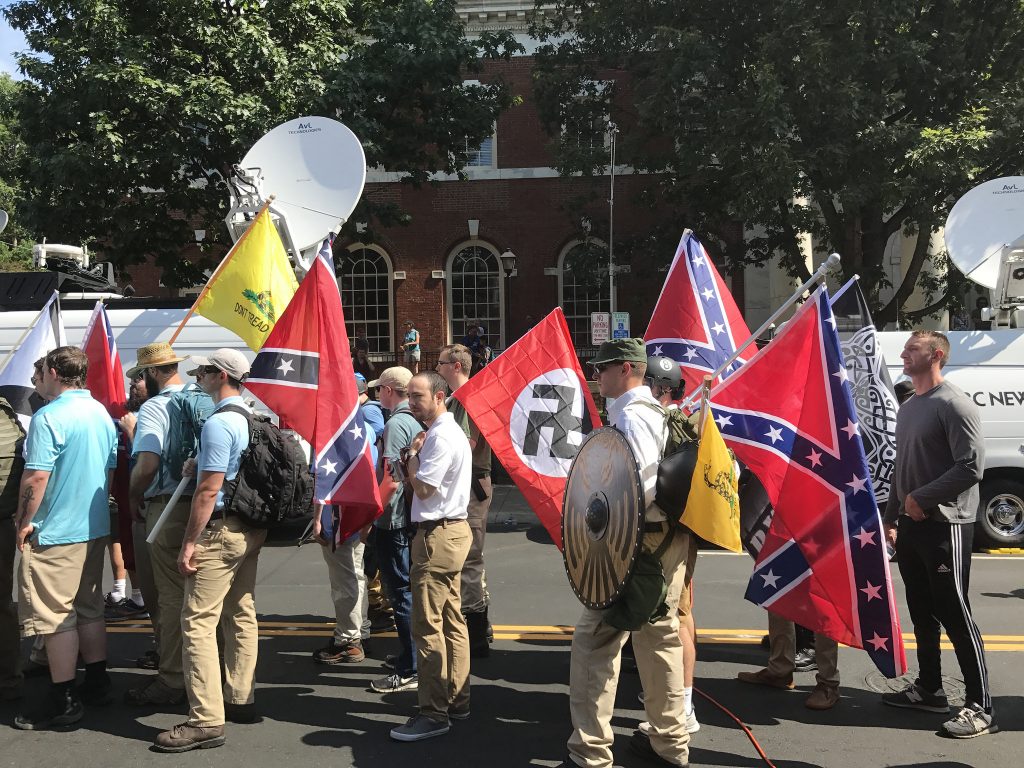 A federal judge has ruled a lawsuit may proceed against dozens of organizers in last year’s violent white supremacist rally in Charlottesville, Virginia, finding sufficient evidence defendants arrived at the event with the intention of implementing and celebrating racially-motivated violence.

The ruling, issued just days after the one-year anniversary of the rally, potentially expands the scope of responsibility for the one death and dozens of injuries inflicted on counter-protestors. Until now, much of the attention on the rally has focused on the criminal homicide case — but the civil case has potentially wide-reaching ramifications involving public assembly, free speech and more, making it worthy of a closer look.

The Charlottesville Tragedy: A Look Back on the One Year Anniversary

The horrifying images from last year’s Unite the Right rally are still fresh in the minds of many. On the evening of August 11, 2017, Tiki-torch wielding Neo-Nazis and other white supremacists marched through city streets while chanting racist slogans including “Jews will not replace us!”

The rally continued into the next day and quickly became violent. At least 15 violent skirmishes occurred that day between rally participants and counter-protestors. Shortly before noon, before the rally was even officially scheduled to begin, the event was shut down and a State of Emergency declared.

Unfortunately, the violence only escalated. Rally attendee (and well-documented Nazi sympathizer) James Fields rammed his Dodge Charger into a crowd of counter-protestors, killing 32-year-old Heather Heyer and injuring 19 others. Additionally, two state troopers lost their lives that day in a helicopter crash which occurred while monitoring the rally from the air.

One year later, Fields has been charged with 30 federal hate crimes. Appearing in court earlier this month, Fields pled not guilty to all charges, each of which carries a maximum sentence of life in prison. Aside from the upcoming federal trial, Fields has also been charged with first-degree murder by the state of Virginia.

The horrific actions in the criminal case certainly warrant attention. However, the criminal charges focus only on Fields. Many believe responsibility for the violence, not just legally but also morally, extends beyond Fields to all Unite the Right organizers. This is the basic idea behind the civil lawsuit, which names a wider range of defendants.

A Summary of the Civil Case

Plaintiffs in the civil case allege they were injured during the two days of protests. Some plaintiffs say they were assaulted by torches, pepper spray and more by individual defendants during the march. Others claim injuries occurred due to Fields.

Notably, the suit is not filed against the individuals who directly engaged in the violence. Instead, Sines v. Kessler names a variety of organizers and promoters of the Unite the Right rally. Unsurprisingly, this group of defendants is a veritable “who’s who” of neo-Nazis, white supremacists and other affiliated groups. Individuals and organizations named in the suit include white nationalist Jason Kessler, extremist group Identity Evropa, white supremacist Richard Spenser and many more.

These defendants filed a motion to dismiss the suit. However, in a 62-page ruling issued on July 9, 2018, U.S. District Judge Norman K. Moon dismissed the motion and allowed the case to proceed.

“As Judge Moon makes clear in his opinion, ‘the First Amendment does not protect violence,’” said Robbie Kaplan, co-lead attorney for the plaintiffs. “What the Defendants did last summer in Charlottesville was not constitutionally-protected speech. We look forward to continuing with discovery and to bringing our client’s claims to trial this time next year.”

Far from simply creating a rally to exercise their free speech, the court ruled Defendants engaged in a conspiracy to plan, implement and even celebrate racially-motivated violence. Specifically, Defendants targeted African-Americans, Jews and their supporters.

“Plaintiffs have, for the most part, adequately alleged that defendants formed a conspiracy to hurt black and Jewish individuals, and their supporters, because of their race at the August 11th and 12th events,” said the judge.

Only one defendant was dismissed from the case, a man named Michael Peinovich who hosts an anti-Semitic podcast called The Daily Shoah and whose image was featured on promotional posters for the Unite the Right rally.

The case can now proceed to discovery, with a trial date set for July, 2019. Plaintiffs are represented by Karen L. Dunn and Roberta Kaplan. Kaplan might be familiar to legal observers due to her work on a landmark Supreme Court case which struck down a provision in federal law that banned gay marriage. Assisting with the case is the non-profit Integrity First for America.

Defense counsel is, to put it mildly, a bit less conventional. Thirteen of the Defendants are represented by James E. Kolenich, a Cincinnati-area lawyer and avowed white supremacist. Providing co-defense is Elmer Woodard, a colorfully-dressed lawyer known for making transphobic statements in court. Meanwhile, Richard Spencer has retained John DiNucci from northern Virginia, although Spencer is facing increasing financial hardship after being banned from most mainstream crowdfunding sites.

The ruling strikes a serious blow against Charlottesville organizers, who have tried to distance themselves from the violent actions of Fields and others. The court makes clear that this was not a protest which turned violent, but rather an event originally planned as a race-based riot.

While all Americans are guaranteed the right to free speech, the First Amendment doesn’t protect violence or threats of violence. Rally organizers, even those who did not participate in the violence directly, can still be found legally responsible for the injuries caused during the Unite the Right event.

On Friday 3/20/2020, in response to the COVID-19 pandemic, Governor Cuomo of New York issued Executive Order 202.8 which tolls the time limits for … END_OF_DOCUMENT_TOKEN_TO_BE_REPLACED