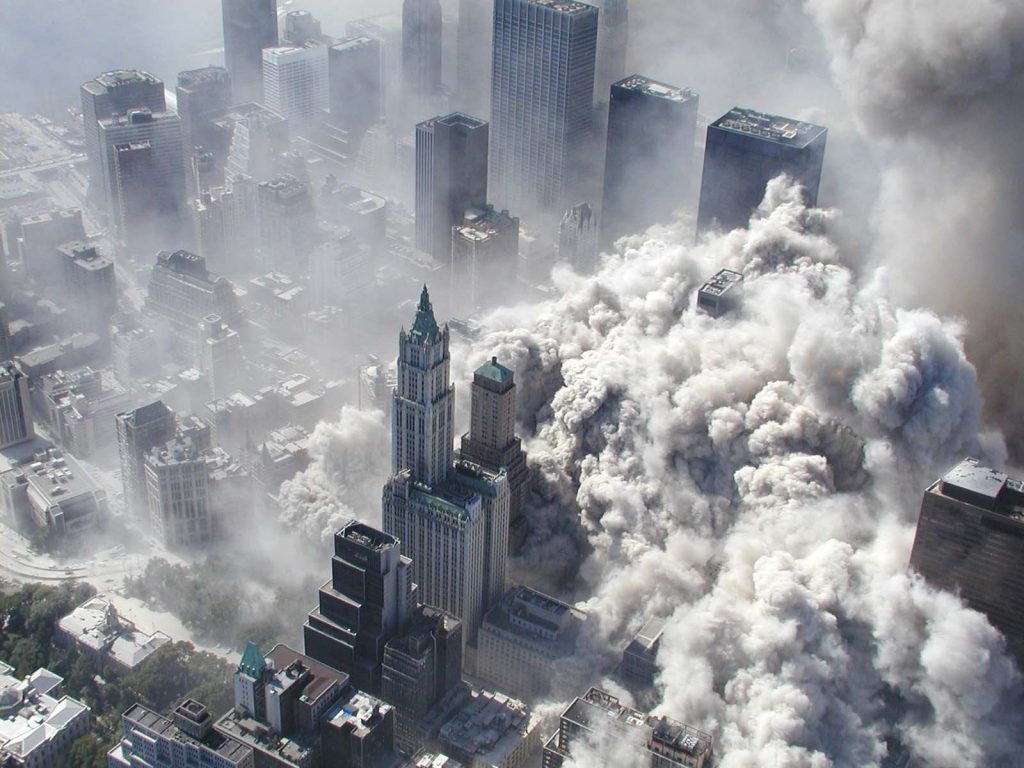 While Donald Trump demoralized the FBI by firing former FBI Director, James Comey and calling him a “nut job”,  current FBI Director Christopher A. Wray is eulogizing FBI agents who are dying from cancer at alarming rates as a result of their heroic efforts to uncover bodies and investigate 9/11 crime scenes.

Fifteen current and former FBI officials have died since 9/11 as a result of illnesses caused by the toxins inhaled during their work at the attack sites, according to CNN’s David Shortell and Nadia Kounang.

Meanwhile, 12 men who were near Ground Zero have developed breast cancer, according to The New York Post’s Carl Campanile, in an article provided by personal injury attorney, David L. Eisbrouch, of Eisbrouch Marsh, LLC, who works with the 9/11 Victims Compensation Fund to monitor and treat survivors.

Bin Laden Reaching Out from the Grave

According to a Los Angeles Times story, written by Del Quentin Wilber, entitled “Sept. 11 is Still Killing FBI Agents. It’s like Bin Laden Reaching out from the Grave, “FBI agent Dave LeValley was driving to work in Manhattan when he saw the first jetliner strike the World Trade Center on a bright September morning 17 years ago.

“He quickly parked his car and sprinted to the scene, where he scoured for evidence and helped survivors, while dodging falling debris and bodies.

“When the first tower collapsed, he dove into a bodega, escaping with his life. What he couldn’t outrun: the toxic cloud of dust,” LA Times’ Wilber, writes.

LeValley joined the FBI in 1996 and led the bureau’s Atlanta office.

He was diagnosed in 2008 with chronic lymphocytic leukemia. He died in May, age 53, from a form of cancer that had metastasized to his brain.

FBI officials and health experts say the cancers are caused by jet-fuel fumes and dust after the 9/11 attacks.

Wilber writes that while one FBI agent was killed in the attacks, 15 have died from cancers linked to toxic exposure during the investigation and cleanup.

He says the 15 agents’ deaths–saluted as FBI heroes–are “part of a much larger tragedy.

“More than 7,500 emergency responders, recovery and cleanup workers and volunteers at the three 9/11 crash sites [including Ground Zero, The Pentagon and a field in Shanksville, PA] have been diagnosed with various forms of cancer, according to the World Trade Center Health Program,  administered by the U.S. Centers for Disease Control and Prevention.

FBI Director Christopher A. Wray has eulogized three agents who died this year and said the deaths have “profoundly affected him and his agency,” LA Times’ Wilber writes.

“The thing that really jumps out at me about the three agents whose memorial services I’ve been to is how just utterly selfless these people were,” Wray said. “They were extraordinary people.”

“It is believed that 60,000 to 70,000 first responders breathed those toxins in during rescue and clean-up efforts.

“Hundreds of FBI officials in dark suits bowed their heads in a Virginia chapel as a pastor offered a prayer to God “Your son gave his life so that we may live,” the CNN reporters write.

“Before him and in the center of the vaulted space was the coffin of David LeValley, draped in an American flag.”

LeValley, the FBI’s top agent in Atlanta, died in May of cancer contracted while he combed the World Trade Center ruins.

“He was buried in a military ceremony at Quantico National Cemetery.

“Crews was the third current or former agent in only the past few months to be recognized with this kind of line-of-duty death,” the CNN reporters write.

The program tracks and provides medical monitoring and treatment for emergency responders, workers, volunteers and survivors of the 9/11 attacks, according to CNN.

“The first wave was…the deaths and all the acute injuries in the first couple of days.  The second wave was the aftermath and [development of] sinus issues, asthma, anxiety and depression,” Dr. Jacqueline Moline, director of the Queens World Trade Center Health Program at Northwell Health, told CNN.

And now, she said, “the illnesses have taken on a new dimension. “The third wave is the diseases that take years to manifest. The transformation from acute to chronic to permanent disease. And that’s where we really are now,” Moline said.

“It’s like Bin Laden is still reaching out from the grave,” FBI agent Thomas O’Connor, who is President of the FBI Agents’ Association, a service and advocacy group for active and former agents, told the LA Times.

“In this time of FBI bashing, I think it’s important for people to know that the agents continue to do this type of work.

The LA Times reports that, “Robert Roth was based in Quantico, VA., on Sept 11 and drove straight to the Pentagon when he heard the news. He spent days setting up search teams and gathering evidence, said his wife, Teresa Roth.

“When he came home, Roth complained of a metallic taste in his mouth and a burning in his nose. But as the months wore on, his wife said, he put the attacks behind him. An athlete, he kept in shape by running and lifting weights and was known for avoiding junk food.

“He was the office health nut,” she said. “Only protein and vegetables.”

“While jogging with his children in 2006, Roth felt pain in his left hip, his widow said. When the pain wouldn’t go away, the doctor ordered tests that revealed the father of five was suffering from a serious form of multiple myeloma. He died 18 months later.

“There is a heaviness, especially now at the FBI,” Roth said. “So many agents have it, that it’s now to the point where other are wondering when their time is going to come,” she tells the LA Times.

Most first responders rushed to the crash sites without wearing the proper safety gear, unaware of the toxicity that would later compromise their health.

“The 9/11 attack has produced another health nightmare—at least 15 men who were in the vicinity of Ground Zero defied astronomical odds and have been stricken with breast cancer,” according to a New York Post article by Carl Campanile, published on September 4.

Men account for only 1 percent of all breast cancers nationally, so cancer among males is an anomaly.

“In 2011, he noticed a lump in his chest, diagnosed as Stage 3 breast cancer,” the Post’s Campanile writes.

“Three years later, a new lump appeared on his neck. Stage 4 cancer had invaded Flynn’s lymph nodes. That cancer is being treated with steroids and the drug iBrance,” according to the New York Post’s Campanile.

“He received a six-figure award from the September 11th Victims Compensation Fund that’s helping him cover the co-pays for his medications.

… Breast cancer victims include the triathlete, John Mormando, 51, a commodities broker who worked at the Mercantile Exchange until 2007, according to The Post.

“Last year, he ran the New York Marathon and was preparing to compete in a full Iron Man contest when he noticed a lump on his chest. He is now undergoing chemotherapy.

“A third breast-cancer victim, Leon Silverstein, 89, had both his breasts removed,” The Post’s Carl Campanile concludes.

Meanwhile, one 9/11 survivor, who requested anonymity to discuss a sensitive matter, was 10-years old when she and her family were forced to evacuate their apartment at Battery Park City, near Ground Zero.

Her mother, now in her 50’s, was treated for breast cancer last year, and is now running marathons, thanks to the Victims Compensation Fund.

She says she’s heard The Victims Compensation Fund, and the Zadroga Act that funds payments to 9/11 victims, would end in 2020.

Attorney David Eisbrouch notes the Zadroga Act is “extremely important to compensate victims who were exposed to toxins below Canal Street and have been diagnosed with cancers and respiratory diseases. 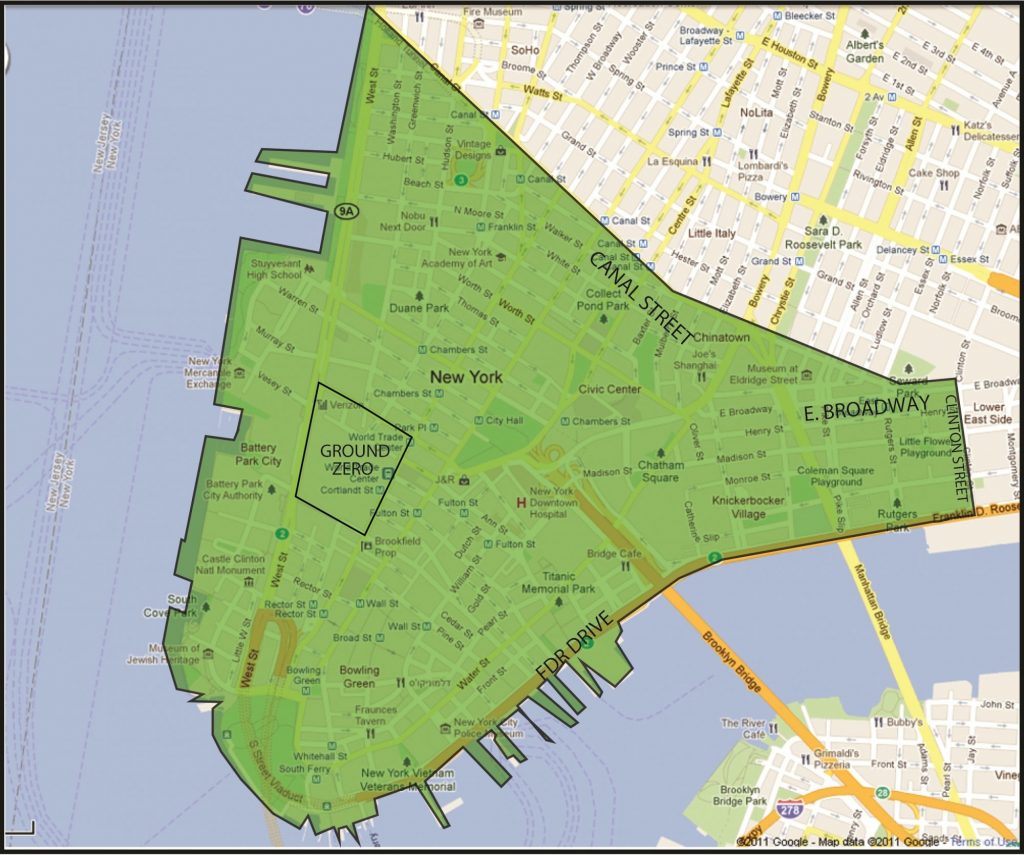 The “exposure zone” is defined as the area of lower Manhattan south of Canal Street/East Broadway/Clinton Street.

He notes that Jon Stewart and others should be commended for their fight to protect and extend the compensation fund.

The James Zadroga 9/11 Health and Compensation Act of 2010, passed under President Obama, is a U.S. law to provide health monitoring and financial aid to the first responders, volunteers, and survivors of the September 11, 2001 terrorist attack,” according to Wikepedia.

The Zadroga Act is named after James Zadroga, a New York Police Department officer whose death was linked to exposures from the World Trade Center disaster.

“The law funds and establishes a health program to provide medical treatment for responders and survivors who experienced or may experience health complications related to the 9/11 terrorist attacks, “according to Wikipedia

“Senator Bob Menendez and Representative Carolyn Maloney initially co-sponsored the bill, which failed to pass in 2006.

“A different version of the bill passed both chambers in 2010 and was signed by President Obama in the beginning of 2011,” according to Wikipedia. 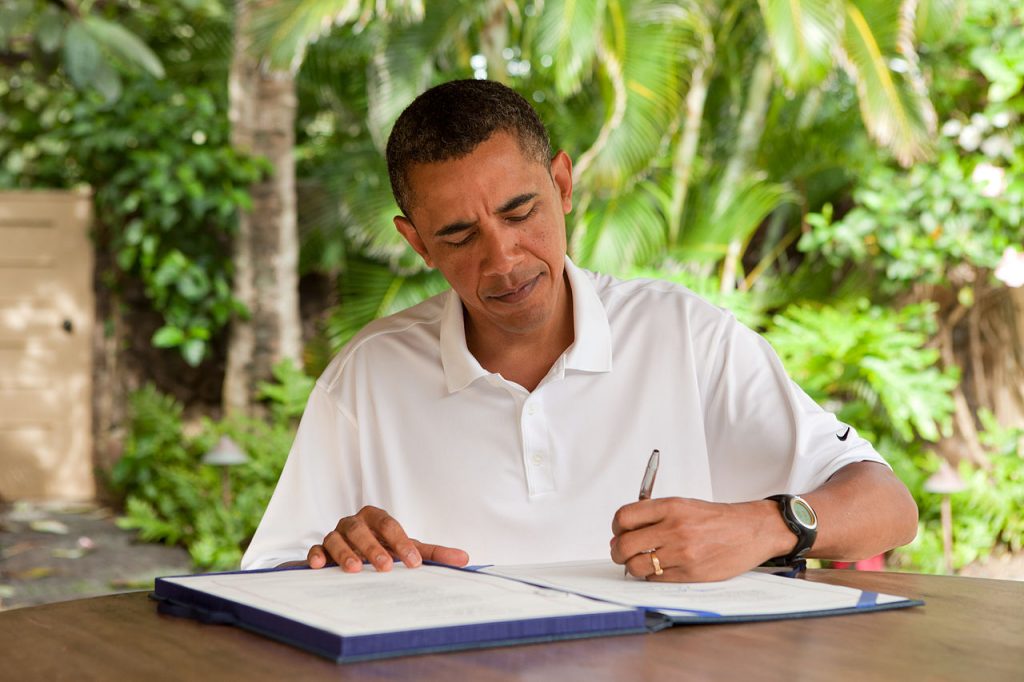 On September 13, 2006, then-Senator Hillary Clinton, Democrat of New York, introduced a bill that would create a five-year, $1.9 billion treatment program for sufferers of Ground Zero dust and fumes after-effects, according to Wikipedia.

The U.S. House passed a new version of the Act in September 2010. New York City Mayor Michael Bloomberg asked the Senate to do the same,” Wikipedia notes.

“In a Senate vote held on December 9, 2010, Democrats were unable to break a Republican filibuster against the bill,” Wikipedia writes.

“Opposed Republicans expressed concerns over the $7.4 billion cost of the bill.

“According to Republicans, the provisions to cover the cost of the healthcare program via an excise tax increase on foreign-made goods would violate international tax treaties.

“With only 57 votes to end the Senate filibuster and an incoming influx of Republicans in the wake of the 2010 Congressional Elections, the bill’s future looked increasingly doubtful towards the end of 2010,” Wikipedia states.

“On December 16, 2010, comedian Jon Stewart dedicated an entire episode of The Daily Show to the political battle over the Zadroga Act.

“Guests included four 9/11 first responders suffering from severe diseases and injuries related to their work near the WTC site.

“Stewart also interviewed Republican Mike Huckabee, who urged that ‘every Republican should vote for this bill,” Wikipedia writes.

Stewart also lambasted the lack of media coverage over the bill’s political struggle in Congress.

“New York City Mayor Michael Bloomberg described Stewart’s coverage as “one of the biggest factors that led to the final agreement”, Wikipedia notes.

On Friday 3/20/2020, in response to the COVID-19 pandemic, Governor Cuomo of New York issued Executive Order 202.8 which tolls the time limits for … END_OF_DOCUMENT_TOKEN_TO_BE_REPLACED