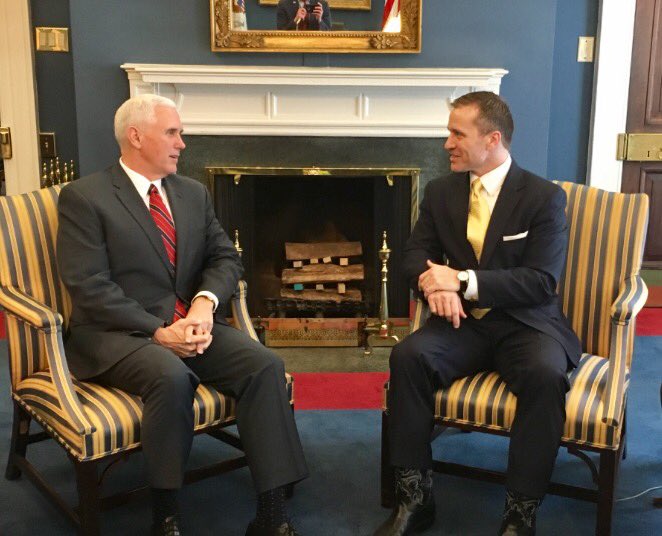 Calls for Republican Missouri Governor Eric Greitens’ impeachment grew louder Wednesday, after a state House of Representatives investigatory committee concluded he used a top donor list from the veterans charity he founded to finance his campaign, a felony in Missouri.

The report also says Greitens’ campaign “lied when it settled a Missouri Ethics Commission complaint last year by categorizing  the charity list as an in-kind donation valued at $600, provided on March 1, 2015 by former campaign aide, Daniel Laub,” according to The Associated Press.

“The whole document made me sick,” Laub testified.  “One, because it was misrepresented; and two, because now I was in a round of news stories falsely portraying what happened,” according to AP.

The House committee concluded that Krystal Proctor, a former assistant of the charity, who worked for the campaign—not Laub– obtained the list and handed it to other campaign officials,  with the governor’s full knowledge.

Greitens, a 44-year old former Navy Seal and Trump supporter, who switched parties to run on the GOP ticket, founded the veterans’ charity, Mission Continues, in 2007, but stepped down as CEO in 2014 in preparation for his gubernatorial run.

On the sex-scandal front, Greitens was accused of taking a picture of his partially nude lover and transmitting it over a computer in January 2018, one year after he became governor, and almost three years after the extramarital affair took place in March, 2015– just one month before the statute of limitations on the crime was due to run out.

On April 30, Greitens’ defense attorney told a St. Louis court that Scott Faughn, an owner and publisher of The Missouri Times gave $50,000 cash to lawyer Al Watkins, who represents the ex-husband of the unidentified woman.

He said that: “in addition to the Missouri Times’ gift of $50,000 to Watkins “the other $50,000 payment to Watkins’ Clayton law firm in January was delivered by a courier known to Watkins only by a first name.

“Faughn, a former mayor of Poplar Bluff, Mo., started the SEMO Times, an alternative weekly in Poplar Bluff, Mo., in 2008. Faughn was convicted by a Cape Girardeau County jury in 2007 of forging checks on an account for a highway project. He was fined $1, 500,” Hancock writes.

Greitens was booked and released from custody for the felony on February 22. His trial is due to start on May 14 and carries a four-year prison term. A special House committee investigating the allegations against the governor is expected to subpoena Faughn and has subpoenaed Watkins.

Hawley in Dead Heat with McCaskill in Swing State

Missouri has become a war zone as the Attorney General, Josh Hawley, who’s in a dead heat with Democrat Claire McCaskill for this year’s crucial swing-state Senate race, is eager to impeach and distance himself from Greitens.

“Hawley [previously] said his office has discovered evidence that Greitens may have committed a felony offense by using a donor list of his veterans charity, the Mission Continues, to ask for donations leading up to his 2016 campaign for governor, according to Vox’s Ella Nilsen in an article entitled, “There’s An All-Out War Between the Republican Governor and Republican Attorney General in Missouri: Missouri Attorney General Josh Hawley Really Wants Gov. Eric Greitens to Resign”.

“Using a charity list for political fundraising is a felony under Missouri law,” Nilsen writes “The statute of limitations is approaching, so Hawley disclosed the information to both the St. Louis Circuit Attorney and the Missouri House Committee investigating Greitens.

Missouri’s impeachment process is unique to Missouri and Nebraska, since seven judges selected by the Senate and not the state Senate try the case.

Impeachment doesn’t mean suspension from office, either in state or Federal cases. Impeachment is simply an investigative process.

If Greitens is impeached, seven jurists would determine whether the Governor’s term is suspended.

On Friday 3/20/2020, in response to the COVID-19 pandemic, Governor Cuomo of New York issued Executive Order 202.8 which tolls the time limits for … END_OF_DOCUMENT_TOKEN_TO_BE_REPLACED