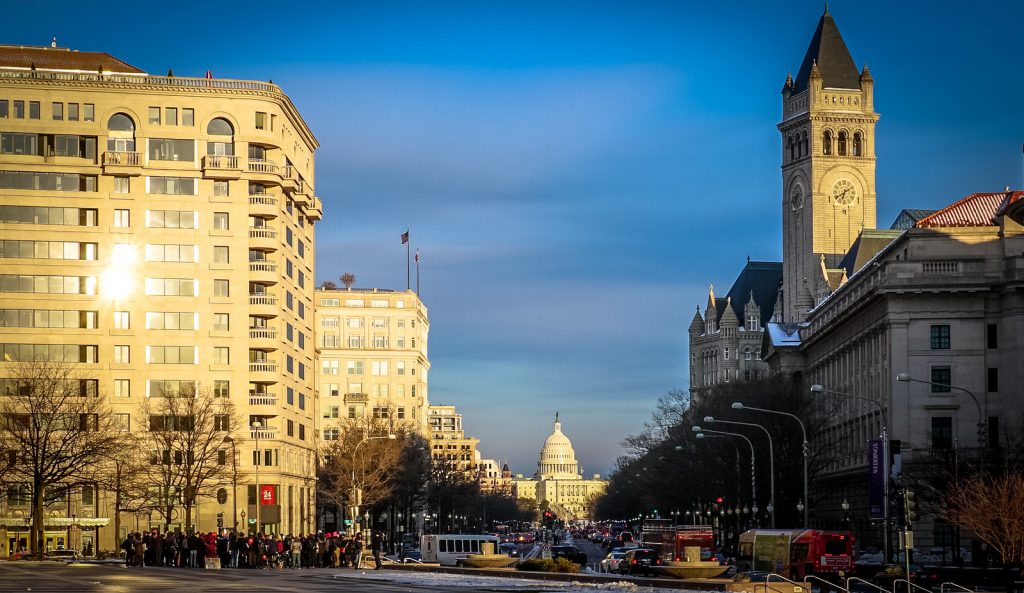 As the Republican Congress ignores George Washington’s warnings against entanglements with foreign countries, Bill Clinton appointee, U.S. District Judge Peter Messitte ruled with the plaintiffs in District of Maryland v. Donald Trump opinion that the emoluments clause of the U.S. Constitution may constitute an “advantage”, rather than an outright “gift”, as Trump’s attorneys contend.

The ruling clears the way for the Maryland and Washington, D.C., attorneys general to proceed in their suit charging that the President’s receipt of foreign moneys and operation of his hotel violated the Constitution’s emolument clause and has put nearby hotels at a competitive disadvantage.

“This is the nightmare—or one of them—that Trump has long feared, namely litigation in which his business operations, perhaps even tax returns, are laid bare,” Rubin concludes.

A Daily Spectacle at the White House Annex

The Washington Post’s Jonathan O’Connell wrote a year ago in August, 2017, “the Trump International Hotel is a daily spectacle of Washington influence at 1100 Pennsylvania Ave, the city’s newest luxury hotel that has quickly become a kind of White House annex.”

“This is nothing Washington has ever seen. For the first time in presidential history, a profit-making venture touts the name of a U.S. president in its gold signage.

“And every cup of coffee served, every fundraiser scheduled, every filet mignon ordered feeds the revenue of the Trump family’s private business,” O’Connell writes.

The Post’s Rubin writes that “the Trump decision is an impressive, detailed analysis of the Constitution and 18th century language.

“This is a judge who did his homework,” she writes.

“The ruling is the inevitable result of Trump’s decision to maintain ownership of his far-flung business operations and to continue to reap the benefits, foreign and domestic, resulting from his presidency…”

“The text of both the domestic and foreign emolument clauses strongly indicate that the broader meaning of ’emolument’ advanced by the plaintiffs was meant to apply.”

“As plaintiffs point out, the Foreign Clause bans, without Congressional approval, any Presidential Emolument Office, or Title, of any kind whatever from any King, Prince or foreign State,” Rubin writes, quoting from Judge Messitte’s decision.

“Use of such expansive modifiers significantly undermines the President’s argument that this Clause was meant to prohibit only payment for official services rendered in an employment-type relationship,” Judge Messitte stated.

“Likely included in the broad definition endorsed by the court would be hotel room rentals, trademarks, licensing deals and other benefits afforded to Trump businesses.

Rubin concludes, “…If Democrats take one or both Houses in the midterms, you can be sure they will not approve any foreign receipts, but rather, will dig to find Trump’s foreign monies and perhaps even make him cough them up.

“Trump might finally face the prospect of choosing between his business interests and his presidency.”

Rubin notes that Harvard Professor, Laurence Tribe “has been making the emoluments argument in court and in the court of public opinion.”

Tribe states, “It’s an extremely significant ruling, the first federal judicial decision addressing—and endorsing—the theory we have been advancing on the Emoluments Clause ever since the start of the Trump administration.”

ZTE: Lifting Sanctions on the Enemy

Politico’s Brent D. Griffiths and Annie Karin report that the Commerce Department banned ZTE from accessing US technology after the company was accused of selling highly-sensitive telecommunications equipment to Iran and North Korea.

The Washington Post reported in June, “as it turns out, the South China Morning Post reported last week that a real estate development project in Indonesia containing a number of hotels, homes—and let’s not forget the golf course—bearing the Trump name, received $500 million in loans from the Chinese government.”

Trump’s foreign ventures include his “Trump Turnberry” Scottish golf resort that The New Yorker writes is a money-laundering venture, lavishly refurbished, hemorrhaging money, and likely funded by dark money seeking a safe haven in the West.

The Huffington Post reports “that according to Scottish newspaper The Scotsman, the State Department made payments to SLC Turnberry Limited of more than $68,000 to cover expenses incurred during Trump’s weekend visit in mid-July.

“While the amount itself is not unusual for an international presidential trip, the Federal funds used to pay for it typically do not go to a business owned by a sitting president, especially one who has yet to fully divest from the company which owns the resort,”  The Huffington Post reports.

Les Gminski contributed to this article.

On Friday 3/20/2020, in response to the COVID-19 pandemic, Governor Cuomo of New York issued Executive Order 202.8 which tolls the time limits for … END_OF_DOCUMENT_TOKEN_TO_BE_REPLACED