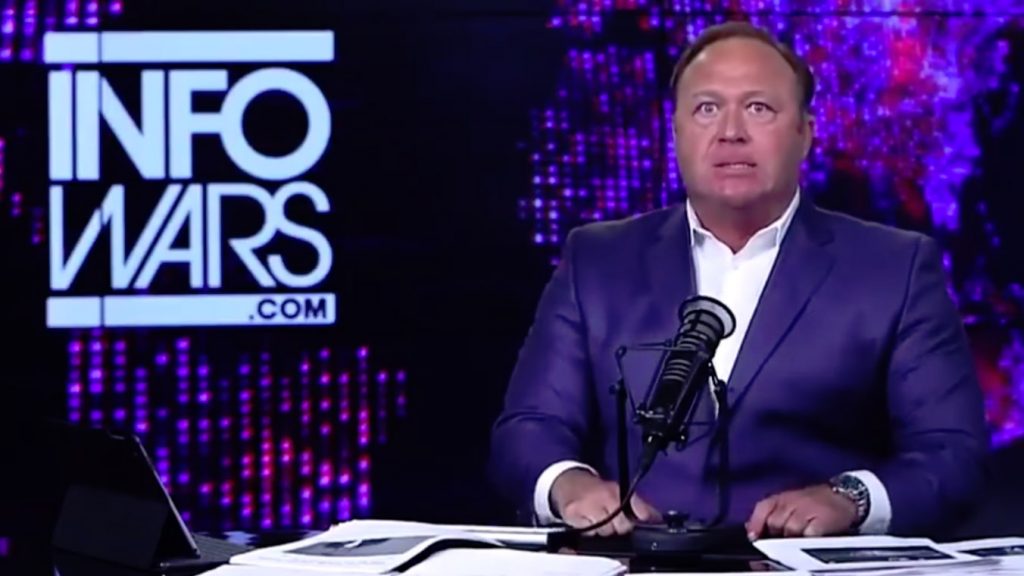 If you’re familiar with the name “Alex Jones,” you either love him or hate him; no one could possibly be ambivalent about Alex Jones. You either cherish what he stands for, and what he’s ranting about, or you loathe him and disagree with every word that comes out of his mouth.

Who is Alex Jones?

He’s an Austin, Texas-based radio show (“Infowars”) founder and host. He is also a conspiracy theorist who infamously claimed the Sandy Hook school shooting on December 14, 20012 in Newtown, Connecticut never actually happened, was staged by left-wing liberals and carried out by actors.

Most Americans will never forget the day 20-year-old Adam Lanza walked into Sandy Hook Elementary School and fatally shot 20 six- and seven-year old children and also killed six school staff members. He shot his mother to death in her bed before heading to the school; his mother, Nancy Lanza, had legally purchased all of the guns her son used during the school massacre.

Alex Jones, after years of conspiracy theories and claims the shooting was a hoax, is in the news again because on August 30, 2018, a Texas judge ruled that Jones must face the defamation lawsuit brought by parents of one of the young victims of one of the most horrifying school shootings in American history.

Veronique De La Rosa and Leonard Pozner, the parents of Noah Pozner, who was just six years old at the time of the Sandy Hook rampage, filed a defamation lawsuit in state district court in Austin, Texas. Among other things, Jones even went as far as to claim Noah’s mother faked an interview with Anderson Cooper following the murder of her son. Now, a judge has ruled that the suit will move forward after denying Jones’ motion to have the suit dismissed.

Using his radio broadcast and videos online as platforms for his beliefs, Jones, for many years, insisted the school shooting at Sandy Hook Elementary was a staged event by the government (a “false flag”) in an effort to confiscate firearms from American citizens, and that the parents of the children were “crisis actors.” Jones went so far as to claim that one father lied about holding his lifeless son in his arms and that the bullet hole in his son’s head was not real. The father, Neil Heslin, has also brought a defamation suit against Jones, but a judge has not yet ruled on that case.

Mr. Pozner has been successful in getting an Infowars video stating the Sandy Hook shooting was a hoax removed from YouTube. Other allegations from Pozner include Jones providing his audience with maps to Pozner’s home and addresses of family members. This information led people to make death threats against Noah Pozner’s parents and they now feel they will never be left alone since Jones made their personal contact information public.

In a shocking turn of events, Jones has countersued asserting his Constitutional right to free speech. His defense team actually claims “…that it is his constitutional right to invent stories and that no reasonable person would take Mr. Jones’ words as fact.” Jones said the lawsuit was part of the parents’ public campaign “to outlaw conspiracy theories, assault rifles, high-capacity clips and to increase firearm registration requirements.”

In order to win a defamation lawsuit, the plaintiff must prove that the defendant made a false statement of fact and that they suffered harm as a result. When the plaintiff is a public figure, it must also be proven the “person making the false statement acted intentionally or with reckless disregard for the truth (known as “actual malice”).

One of the factors that make this such a challenging legal case is the legal definition of the terms “defamation,” “actual malice” and “public figure.”

On Friday 3/20/2020, in response to the COVID-19 pandemic, Governor Cuomo of New York issued Executive Order 202.8 which tolls the time limits for … END_OF_DOCUMENT_TOKEN_TO_BE_REPLACED