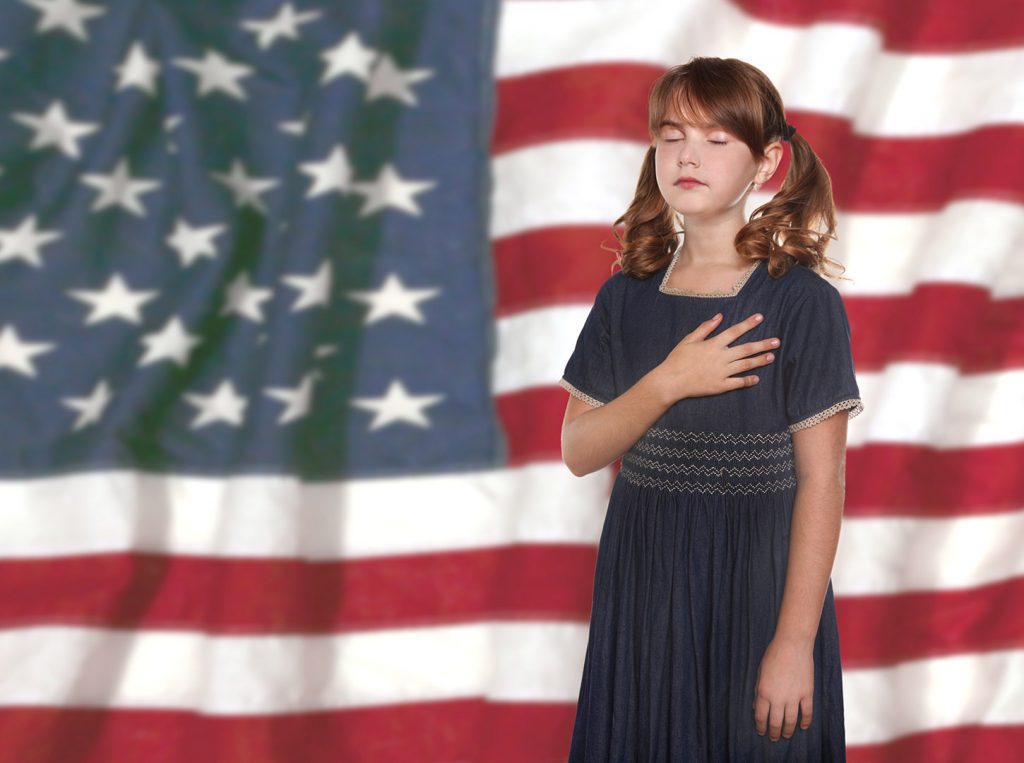 On Monday morning, Landry was in the principal’s office when the student body began its daily recitation of the Pledge of Allegiance. Rather than standing, Landry sat, out of protest, and did not participate. The principal, Martha Strother, immediately removed Landry from school and prevented her from returning until Friday of that week.

According to KHOU, a local Houston TV station , India Landry says she hasn’t stood for the pledge “for as long as [she] can remember” and claims that faculty only recently began to take issue with her protest, following the media exposure similar protests have received. Filings show Landry refused to recite the pledge over 200 times over the course of her enrollment at Cypress Fairbanks. Landry’s punishment came shortly after President Trump’s acknowledgement of the NFL protest in which he called the NFL anthem protestors “sons of bitches.”

As a consequence of Landry’s protests, she was put on suspension and forced to miss school. Her family argues the interruption to her studies led to her later expulsion from the high school before completing senior year. They also accuse staff members of harassing India Landry based on her protests and her race.

Landry and her family filed a lawsuit against Cypress Fairbanks this year. Randall Kallinen, a civil rights attorney representing Landry, believes politics played too strong a role in the state’s decision to back Cypress Fairbanks’ suspension of Landry. Following intervention in the case by the Texas Attorney General, Kallinen told the Huffington Post, “It is an election year and this was political right from the beginning.” The judge denied Cypress Fairbank’s requests for dismissal, and the trial is now scheduled to take place in April.

Court filings obtained by the Washington Post suggest Principal Strother and other school faculty may have drawn inspiration from President Trump’s criticism of recent protests. According to Landry, one school official told her that “this isn’t the NFL” when referring to her refusal to stand for the flag. She also accuses her assistant principal of telling her “to stand for the pledge like the other African American in her class.”

Can students be forced to recite the Pledge?

Students have been permitted to sit during the pledge under certain circumstances throughout American history. The Supreme Court has determined in the past that children could be exempt from reciting the Pledge of Allegiance. In 1943, a case was filed on behalf of a child who was a member of the Jehovah’s Witnesses, whose beliefs prevent them from reciting the pledge. The case, West Virginia Board of Education v. Barnette, determined that not participating in the pledge was included in a citizen’s right to freedom of speech and religion.

The decision was made during World War II, when nationalism, much like now, was a prevalent theme in American politics. In his dissent, Supreme Court Justice Felix Frankfurter argued that the Pledge of Allegiance and other ceremonies are important to “the promotion of good citizenship.” Texas Attorney General Ken Paxton, who recently intervened in India Landry’s lawsuit on behalf of the state, voiced similar beliefs. “Requiring the pledge to be recited at the start of every school day has the laudable result of fostering respect for our flag and a patriotic love of our country,” said Paxton, as reported by BBC.

Paxton acknowledges that Texas state law allows students to abstain from saying the pledge if their parents give written permission. However, in Landry’s case, she did not have a written note prepared before the protests occurred. Because of this, the attorney general says she “cannot unilaterally refuse to participate in the pledge.” Paxton cites a precedent set by Frazier ex rel. Frazier v. Winn, a court of appeals case that established a child’s need for parental consent before forgoing recitation of the pledge.

Parental consent is viewed by Paxton as a “critical aspect of liberty guaranteed by the constitution,” and he believes past Supreme Court cases have held fast on this guarantee. In addition to their reaction to her protests, Landry also accuses Cypress Fairbanks Independent School District of handling her expulsion improperly due to her race.

Civil rights attorney Randall Kallinen argues that the faculty reaction to her protest violated her right to equal protection. On one occasion when Landry was removed from class, Principal Strother suggested she write about the issues her race deals with rather than protesting them. According to Judge Keith P. Ellison, the specific comments made by staff members referring to Landry’s race suggest equal protection violations may be applicable to her situation. If India Landry does not win in April, her lawyer says he is prepared to go as far the Supreme Court to argue her case.

On Friday 3/20/2020, in response to the COVID-19 pandemic, Governor Cuomo of New York issued Executive Order 202.8 which tolls the time limits for … END_OF_DOCUMENT_TOKEN_TO_BE_REPLACED