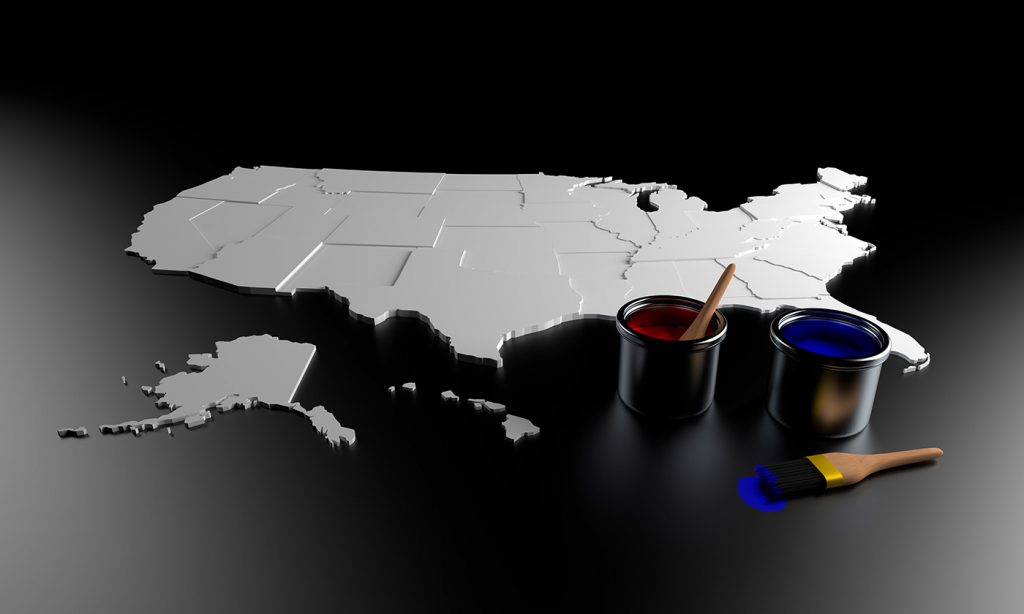 After the elections of George W. Bush and Donald J. Trump, many people – especially democrats – are beginning to doubt whether the US can continue with the Electoral College. (President Trump has even questioned the viability of the Electoral College system.) Under this system, Bush and Trump both slid into the oval office without actually winning a majority of the popular vote. Now a number of Blue states – including New York, Massachusetts and Rhode Island – have entered an interstate compact in order to neutralize the Electoral College. Each state involved in the compact will pass a bill promising to give all electoral votes to the presidential candidate who wins the popular vote.

With 10 states, National Popular Vote Inc. – the organization that authored the boilerplate bill being used in each state – has 165 electoral votes; they need 270, a majority of the Electoral College, in order for the compact to be effective. It looks like Connecticut could be next to join the movement.

At the end of April, the Connecticut House of Representatives passed the bill along party lines, with a vote of 77-73. Three Democrats joined the Republicans in their dissent and only one GOP member defected.  Now the bill will go to the Senate where Martin Looney, the Pro Tempore President, has voiced his support for the legislation.

This bill has been in the works for some time, according to Barry Fadem, president of the National Popular Vote. “This is an important step in restoring Connecticut’s role in presidential elections,’’ he said, continuing, “We are pleased that the House has approved the National Popular Vote bill. After working on the bill for 11 years, we look forward to a successful Senate vote and signature by Gov. Malloy. That will move us closer to assuring that every vote cast for president in Connecticut will matter in every presidential election.”

If the Senate passes the bill and if Governor Dannel P. Malloy signs the legislation, the state would promise its seven electoral votes to the candidate who wins the popular vote. As mentioned, the measure would only take effect when 270 electoral votes are accounted for on the national scale.

Democratic legislators in Connecticut have come out in force, expressing their strong support for the bill. Representative Daniel Fox of Stamford said, “In a National Popular Vote scenario, every vote in every state would matter.” And according to Representative Bob Godfrey of Danbury, “The people of the United States of America should elect directly the president of the United States of America.” He continued, “The whole point of this is to remove state influence and return power of the people.”

The most unexpected supporter of the bill has been President Trump, who would have lost the election had the National Popular Vote bill been in effect. In an interview on Fox & Friends he spoke, as if with amnesia, about the positive attributes of the popular vote: “I would rather have a popular election, but it’s a totally different campaign,” he said, continuing, “It’s as though you’re running — if you’re a runner, you’re practicing for the 100-yard dash as opposed to the 1-mile.” And finally, “I would rather have the popular vote because it’s, to me, it’s much easier to win the popular vote.”

Detractors of the bill argue on the basis of states’ rights. In an article for The National Review, Josiah Peterson, conservative commentator and author of The Electoral College: Critical to Our Republic, decries the National Popular Vote bill as an affront to states with mostly rural populations. He argues that, during the campaign, the Electoral College forces candidates to visit oft-neglected regions of the US and that, without the old system, candidates would most likely stick to the urban geographies of LA and New York City. This is because the electoral college gives smaller, rural states more electoral power than the popular vote.

Even if Peterson is right that candidates would neglect rural areas, he fails to acknowledge the political reality after the campaign. Trump’s campaign-promises to the Rust Belt have proven to be basically empty, and now it looks like support in those regions is dwindling. If the electoral college ensures better optics on the campaign trail, it doesn’t necessarily ensure an even-handed presidency.

On Friday 3/20/2020, in response to the COVID-19 pandemic, Governor Cuomo of New York issued Executive Order 202.8 which tolls the time limits for … END_OF_DOCUMENT_TOKEN_TO_BE_REPLACED