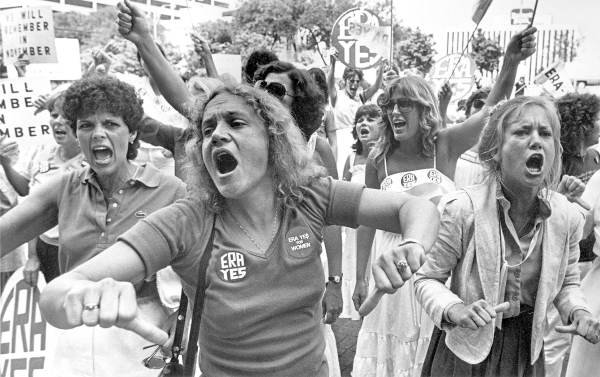 In the wake of the #MeToo movement, state legislatures have been abuzz about the Equal Rights Amendment, a measure that was introduced in Congress in the 1920s but that has not yet been ratified. The ERA provides that the equality of rights “shall not be denied by the U.S. or any state on account of sex.”

In order for the Amendment to have been ratified, according to the original legislation, 38 states would have had to approve the measure by 1982. Now, 36 years after the deadline, Illinois has ratified the ERA, making it the 37th state to do so. If one more state approves the amendment and if Congress removes the 1982 deadline from the language of the original bill, the ERA could finally become law of the land.

Legislators in the Illinois House passed the measure at the end of May with a vote of 72-45, just one month after the Senate approved the legislation with an overwhelming majority of 43-17.

Representative Stephanie Kifowit, a Democrat from Aurora, expressed her dismay over the extreme delay: “I am appalled and embarrassed that the state of Illinois has not done this earlier.” She continued, “I am proud to be on this side of history and I am proud to support not only all the women that this will help, that this will send a message to, but I am also here to be a role model for my daughter.”

There are a number of potential factors at play in the rebirth of the ERA movement. For one, the election of an openly misogynist president has given way to some push back against a perceived erosion of norms. Moreover, the rise of (overt) male chauvinism in the White House has met resistance in the form of the #MeToo movement – a movement that has been propelled in part by a swell of investigative journalism at numerous credible news organizations from the New York Times, CNN, the Washington Post and the LA Times to the New Yorker.

To be clear, none of these phenomena are entirely new, but there has been a shift in the discourse around gender equality. And this shift may be putting pressure on politicians to take action where action is due.

When Nevada became the 36th state to ratify the ERA last year, the LA Times released a widely-read article attributing the ratification to the increased focus on income-inequality and Trump-driven policies targeting reproductive rights and other women’s issues.

Roberta Madden, a leader of the NRC-NC in North Carolina, posited similar ideas in a conversation with Vox: “There’s been a lot more interest and a lot more attention in the news media about some of the wrongs against women and the inequalities that we face.” Madden continued, “That’s focused the attention in a way that it hasn’t before.”

As outlined by Vox, the life of the ERA has been one of fits and starts. It was first introduced in 1923 following the Congressional approval of women’s suffrage, and it wasn’t until 1972 that the Amendment was passed in Congress, after years of back-and-forth on the issue. At first, the ERA enjoyed immense support, with 22 states ratifying almost immediately. Then, a conservative back-lash took hold, and people like Phyllis Schlafly – an anti-feminist spokesperson – rejected the (perceived) implications of the amendment.

Schlafly summed up this line of thinking in a 1973 statement: “Since the women are the ones who bear the babies, and there’s nothing we can do about that, our laws and customs then make it the financial obligation of the husband to provide the support.” She continued, “It is his obligation and his sole obligation. And this is exactly and precisely what we will lose if the Equal Rights Amendment is passed.” After Indiana became the 35th state to ratify the measure in 1977, the measure hit a wall – a wall that would stay in place for the next 40 or so years.

The ERA, written by suffragette Alice Paul, needs one more state to ratify before the amendment can be received by Congress. Currently, there are 13 states that have yet to approve the amendment: Missouri, Alabama, Oklahoma, Arizona, Arkansas, Georgia, Florida, Louisiana, Mississippi, North Carolina, South Carolina, Utah, and Virginia. Virginia came close to passing the ERA earlier this year but failed to do so, eliciting cries of “Shame!” from supporters hoping for a different outcome.

On Friday 3/20/2020, in response to the COVID-19 pandemic, Governor Cuomo of New York issued Executive Order 202.8 which tolls the time limits for … END_OF_DOCUMENT_TOKEN_TO_BE_REPLACED