You are here: Home / Discrimination Laws / The Proliferation of Anti-LGBTQ Laws 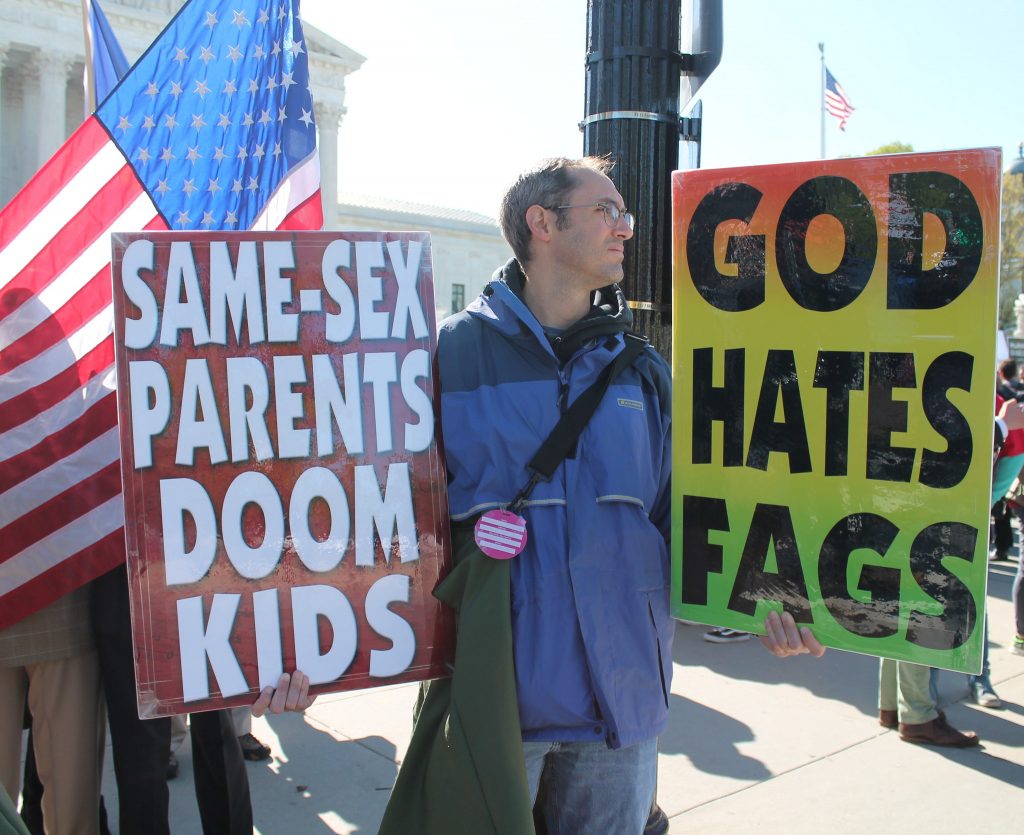 Over time, and through great struggle, federal law has been established to defend against discrimination based on sex, age, nationality, disability, religion or race in a variety of different forums, including housing, education, employment, voting rights, and access to public space. In certain states, people of varying sexual orientations and gender identities (or expressions) have also been included under statutory protections. Other states have actively excluded LGBTQ people from statutory protection by passing laws that prevent cities from implementing their own protective statutes.

A number of states have pushed through religious exemption laws such as religious freedom restoration acts, effectively legalizing discriminatory policies such as refusing to sell a product to someone because they are gay, lesbian or transgender. In other cases, states have passed adoption and foster care laws that make it legal for adoption agencies to withhold a child due to “sincerely held religious beliefs.”

It isn’t very common for a state to pass a law preventing cities from protecting its LGBTQ residents against discrimination. Most people have heard about North Carolina’s “Bathroom Bill,” but Arkansas got less attention when it passed a pre-emption bill in 2015. According to SB 202, “county, municipality, or other political subdivision of the state [may not] adopt or enforce an ordinance, resolution, rule, or policy that creates a protected classification or prohibits discrimination on a basis not contained in state law.”

In February of this year, the Arkansas Supreme Court used that law to block an ordinance passed in the city of Fayetteville to protect people from discrimination based on sexual orientation or gender identity. The law was approved by city council and voters in 2015.

The next state to pass such a law could be Texas, where a bill (HB 2899) is being considered by the state legislature that closely resembles Arkansas’ SB 202 and  North Carolina’s “compromise bill,” passed in March to replace its “bathroom bill.” Some have suggested that the law could also end up removing protections for veterans, the elderly and pregnant women.

HB 2899 essentially states that a “political subdivision” (i.e. a local government) may not implement any measure to “protect a class of persons from discrimination,” or “reduce or expand a class of persons protected under state law from discrimination.” In addition to these broad mandates, the bill would also strike down protective laws already on the books in local governments, effectively pulling the rug out from underneath people who rely on those laws for basic protection.

When North Carolina replaced the “bathroom bill” with the “compromise bill,” the NCAA and NBA “reluctantly” ended their boycotts and restored some economic normalcy to the state – although some state governments are still withholding funds for state-sponsored travel to North Carolina. Texas is probably looking to employ a similar tactic after their failed attempt to pass their own “bathroom bill” through a massive misinformation campaign. With a “softer” bill, Texas might avoid the possible economic repercussions for passing a law that institutionalizes discrimination.

The practice of pre-emption ultimately supports discrimination against LGBTQ people. Without the proper statutory protections, religious schools may fire pregnant women who aren’t married and social workers might refuse to offer counsel to gay people – to name a couple examples.

So far the Supreme Court has yet to consider whether religious exemption laws like HB 2899 conflict directly or indirectly with federal protections against discrimination. In 2014, the Court decided that “closely held” religious for-profit companies could refuse to cover contraception in their employee health care plans. For now, it’s hard to say how the Court would view laws like HB 2899.

On Friday 3/20/2020, in response to the COVID-19 pandemic, Governor Cuomo of New York issued Executive Order 202.8 which tolls the time limits for … END_OF_DOCUMENT_TOKEN_TO_BE_REPLACED