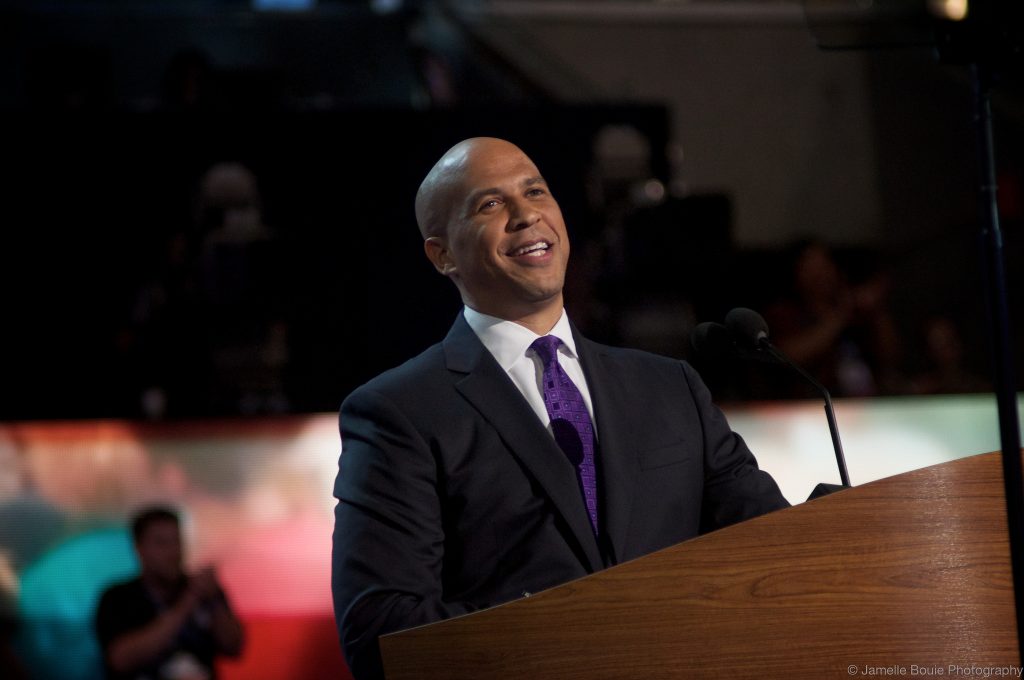 Senator Cory Booker (D. NJ) introduced a bill on Tuesday (Aug. 1st) that would effectively decriminalize marijuana at the federal level. The measure would also withhold certain funding from states who fail to address the disproportionate effects of marijuana-related arrests. The legislation, known as the Marijuana Justice Act, could thus diminish the overwhelmingly uneven impact that pot-related convictions have on people of color.

The ACLU found that, in 2010, African Americans were just as likely to smoke marijuana as white people but nearly four times more likely to be arrested for it. And in certain states the situation was worse. In 2010, when compared to their white counterparts, black people were about eight times more likely to be arrested for marijuana possession in DC, Iowa, Illinois and Minnesota. And according to the Sentencing Project, nearly half the inmates in state prisons for drug-related charges are black, while about two-thirds of drug users (and sellers) are white.

The legislation would do more than just decriminalize the drug; it would also invest funds into bettering the lives of those who have suffered unnecessarily. One provision would erase marijuana charges from ex-inmates’ records, which could be a boon to those who have a hard time finding work after being released from prison. And those already imprisoned could submit applications for resentencing.

Finally – and perhaps this is one of the most pressing provisions – the bill would provide funding to the “Secretary of Housing and Urban Development to establish a grant program to reinvest in communities most affected by the war on drugs, which shall include providing grants to impacted communities” for job training, re-entry services, public libraries, youth programs and health education programs, to name a few.

It should be clarified that the bill would not legalize the drug. That would still be up to the states. It would instead take marijuana off the scheduling system and thus federally decriminalize it, thus removing some of the legal tension between certain states and the federal government.

The legislation will face stiff odds in Congress where a Republican-majority will want nothing to do with the measure. And the Department of Justice certainly will not back the bill. President Trump and AG Jeff Sessions have both announced the return of a “law and order” mentality. Sessions even reversed a guidance from former-AG Eric Holder asking federal prosecutors to minimize certain drug-related charges.

The Failure of Incarceration

Holder’s memo came after years of a brutal “war on drugs” – a “war” that led to a 700 percent increase in incarceration rates between 1970 and 2005. The logic of the war on drugs has broken down over the years. Many studies have emerged showing the ineffectiveness of punitive policies. In a recent letter to the President’s Commission on Combating Drug Addiction and the Opioid Crisis, Adam Gelb, Director of Public Safety Performance Project, summarized the Pew Research Center’s work regarding the impact of incarceration on drug-use. “Higher rates of drug imprisonment did not translate into lower rates of drug use, lower drug arrests, or lower overdose deaths,” he wrote. And to illustrate, Gelb continued, “Tennessee imprisons drug offenders at a rate more than three times greater than New Jersey, but the illicit drug use rate in the two states is virtually the same.”

And it should be mentioned briefly that marijuana could be an effective counter-measure to the opioid epidemic. According to a study by Johns Hopkins Bloomberg School of Public Health, states with legalized medical marijuana have 25 percent fewer opioid-related deaths than states without legalized pot.

Despite the imminent demise of the bill, some news outlets have suggested that Booker’s legislative efforts might signify deeper political changes. In 2015, German Lopez, of Vox, asked Booker about his position on Marijuana. Booker’s reply was watered-down. He advocated for the legalization of medical marijuana, state-level reforms and more scientific testing. “Now,” according to Lopez, “we have a very clear answer.”

For now, the eventual legalization of marijuana can be something to look forward to. Until then, progressives will have to brave through the tumultuousness of the current GOP trifecta.

On Friday 3/20/2020, in response to the COVID-19 pandemic, Governor Cuomo of New York issued Executive Order 202.8 which tolls the time limits for … END_OF_DOCUMENT_TOKEN_TO_BE_REPLACED