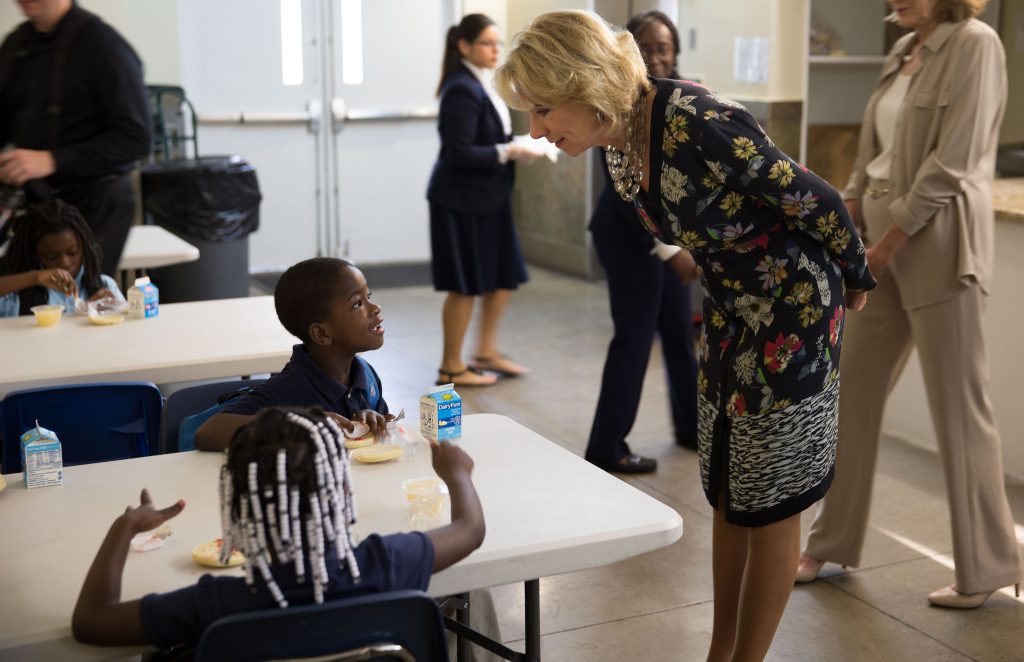 The Supreme Court ruled on June 26th that Trinity Lutheran Church should be included in a Missouri state program granting funds for playground resurfacing. Seven justices voted in favor of the church (though there were several concurring opinions), while Justices Ruth Bader Ginsburg and Sonia Sotomayer dissented. Surprisingly, Justices Elena Kagan and Stephen Breyer (both liberal) joined the majority, voting against the State. For Chief Justice Breyer, who wrote the majority opinion, the case was pretty straightforward, as the State failed to offer compelling reasons for withholding funds.

A win for the Lutheran Church could also be a win for school choice advocates such as Education Secretary Betsy DeVos, who has indicated that she wants to shift the focus from publically funded schools to school vouchers. In a speech at the Brookings Institute, DeVos had this to say: “We must shift the paradigm to think about education funding as investments made in individual children, not in institutions or buildings.”

In his opinion, Roberts conceded that the state-run program was of little consequence and could, at worst, result in “a few extra scraped knees.” However, he added, “the exclusion of Trinity Lutheran from a public benefit for which it is otherwise qualified, solely because it is a church is odious to our Constitution all the same, and cannot stand.” And in a language pleasurable to school choice advocates, he wrote, “The Department’s policy expressly discriminates against otherwise eligible recipients by disqualifying them from a public benefit solely because of their religious character.”

Following the ruling, the Supreme Court vacated and remanded several cases, which will now be reconsidered by lower courts in light of Trinity Lutheran Church of Columbia v. Comer. One such ruling declared unconstitutional a Colorado program covering tuition for children attending private schools. Justices only re-air cases if they think the lower courts will reach different conclusions, meaning Colorado could eventually be allowed to funnel tax dollars toward private (and religious) institutions.

Advocates such as Michael Bindas, senior attorney at the Institute for Justice, wait with bated breath to see whether the Colorado Supreme Court changes its view in Colorado State Bd. of Education v. Taxpayers for Public Education. The state court held that the Choice Scholarship Program violated a section of the state’s Constitution that forbids the state to use public funds “to help support or sustain any school academy, seminary, college, [or] university […] controlled by any church or sectarian denomination whatsoever.”

Justices also sent a case back to the Supreme Court of New Mexico. The lower court held that private and religious schools should not receive the benefits of a textbook-lending program, alluding to a similar constitutional provision in its opinion.

Thirty-nine states (including Missouri and Colorado) have what are known as Blaine Amendments in their constitutions. These amendments are specifically designed to keep public funding out of religious schools. Advocates of voucher programs view the Blaine Amendment as one of the major stumbling blocks of school choice initiatives.

The Fight for Privatization

Advocates like Leslie Hiner, vice president for programs at EdChoice, have successfully argued that once public money is in the hands of a private citizen, it is a matter of free choice unburdened by the strictures of constitutional prohibitions. While this argument has succeeded in some states, it failed in Colorado. But the Supreme Court’s decision could weaken the Blaine Amendment in that state and thus alter the state Supreme Court’s position on public funding.

In a display of rhetorical gymnastics, DeVos praised the decision, saying “religious discrimination in any form cannot be tolerated in a society that values the First Amendment.” She added, “We should all celebrate the fact that programs designed to help students will no longer be discriminated against by the government based solely on religious affiliation.” While steadfast in her “fight” against “religious discrimination,” she has been conveniently vague about her position on discrimination against LGBTQ students.

The question is whether the lower courts will heed the dissenting opinion of Justice Sotomayer who held that the high court’s decision was a “radical mistake” that “leads us […] to a place where separation of church and state is a constitutional slogan, not a constitutional commitment.”

On Friday 3/20/2020, in response to the COVID-19 pandemic, Governor Cuomo of New York issued Executive Order 202.8 which tolls the time limits for … END_OF_DOCUMENT_TOKEN_TO_BE_REPLACED